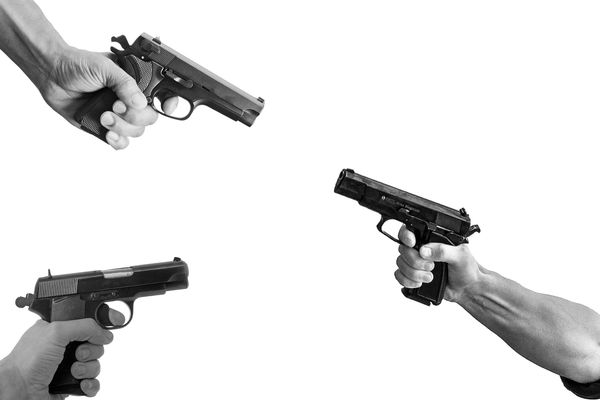 When Can I Brandish My Firearm If I Feel Threatened?

There is an old saying… what is the difference between a new lawyer and an experienced one? A new lawyer knows all the rules. An experienced lawyer knows all the exceptions. In California, the general rule limits the time, place, and manner in which a person may display a firearm. California law provides that if a person draws, exhibits, or uses a firearm in an angry manner, they can be charged with brandishing a firearm. However, there are exceptions to that rule. The use of a gun, or firearm, is permitted when a person is under the reasonable assumption that they are in imminent danger. A person would not be charged if they had displayed their firearm to protect themselves but would be charged if they were displaying it in an angry manner.

California Penal Code Section 417(A) states that it is a crime to publicly display a firearm in certain manners. To be convicted of showing off a firearm, the prosecutor must first prove that you had drawn your weapon or exhibited it while others were present. Also, the prosecutor must:

You can be charged with brandishing a firearm even if it isn’t loaded, and even if it isn’t pointed at anyone. Tight gun laws don’t allow for any leeway, so getting in contact with an experienced attorney is necessary. Pride Legal can help you connect with an experienced gun law attorney to help you with any of your questions or charges you might have.

What’s The Difference Between a Brandishing Firearm and a Deadly Weapons Charge?

Under Penal Code 417 (a)(1), if a person draws or exhibits a weapon other than a firearm in a rude or angrily manner, or uses a weapon during a fight, he or she can be charged with the use of or brandishing a deadly weapon. A “deadly weapon” can be anything from a bat, fork, or knife. Under PC 417 (a)(2), a person may not draw or exhibit their firearm in a rude or angry manner. The difference between the two sections is that if a firearm is included, the charges will be upgraded. The law states that if a person is convicted of brandishing a weapon they can be jailed for between three months and one year. On the other hand, a deadly weapons charge will land the defendant in county jail for at least three months.

When Can I Brandish My Firearm?

You may display your firearm when you feel like your life is in danger, or that you are acting in defense of another person. Some defenses to brandishing a firearm charge could include:

For example, if two people met up at a park or a public place, and a person sees one of the two friends holding a firearm and showing it to their friend. The bystander could be in fear that the man with the firearm could be dangerous, so they call the police. The man with the gun would not be charged with brandishing a gun, as the person was just displaying the firearm and not displaying it in an angry manner.

California laws are much tougher on guns than other states. Although California follows the Castle Doctrine, which allows you to protect your home when it is being broken into, the laws are not lax like in Texas. For example, you may carry your gun on your hip in the state of Texas without a CCW permit. This is not allowed in California and most likely will have your gun taken away if caught doing this. However, you are allowed to brandish your firearm when a group of people walks up to you and demands your wallet. There is a legitimate reason for fearing for your life in that kind of situation, making it legal to use your firearm to protect yourself.

What Is The Castle Doctrine?

The Castle Doctrine allows for the legal presumption if a resident fears that they are in imminent danger they may use deadly force. There are some criteria that must be met, and they are:

A “legal presumption” means that the prosecutor involved in the case must prove that the resident did not have a reasonable fear of imminent danger. This means that the resident is typically given the benefit of the doubt. The doctrine does not apply to those not attempting to force their way in, or those loitering on your property. You may call the police and have them leave, but the doctrine does not allow a person to use force against the perpetrator if they are loitering on your property.

What Is a “Wobbler” Charge?

When a person is charged with brandishing a deadly weapon or firearm, they could either receive a misdemeanor or felony charge. A wobbler offense means your county’s prosecutor will have the decision to upgrade your charge to a felony or charge you with a misdemeanor. The prosecutor’s decision depends on prior convictions and the circumstances of the case. A misdemeanor charge could lead to 30 days in prison, while a felony could land the defendant 3 years in prison.

If you or a loved one has been charged with brandishing a weapon, we invite you to contact us at Pride Legal for legal counseling or any further questions. To protect your rights, hire someone who understands them.