Please ensure Javascript is enabled for purposes of website accessibility How Many Gay Marriages End In Divorce? - Pride Legal 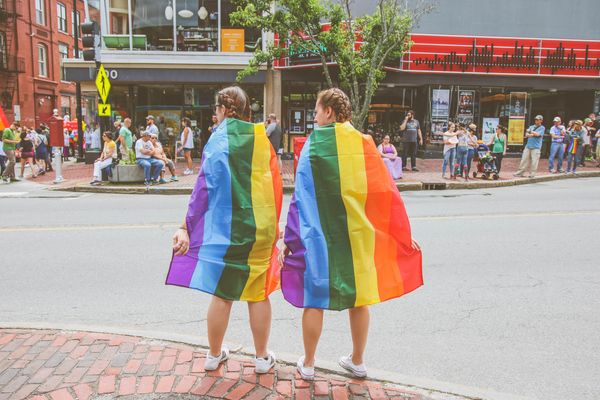 How Many Gay Marriages End In Divorce?

Many people think gay couples or gay marriages tend not to last long or that they are not lifelong marriages. Because more and more countries all around the world are recognizing gay marriage, the surge in gay couples choosing to get married means we have more data than ever before.

The Netherlands, which legally recognized gay marriage before any other country in the world, has the most data. One study suggests that approximately 15% of gay marriages end in divorce within 10 years, as opposed to 18% in their heterosexual counterparts. Below, we will review the differences between gay and straight marriages and divorces.

Comparing the statistics on gay marriage and straight marriage

Some same-sex couples divorce at a rate lower than heterosexual couples, yet some divorce at higher rates. When comparing gay marriages to straight marriages, the data shows that gay people typically stay together longer and divorce less. When comparing heterosexual marriages to lesbian marriages, however, the rate of divorce doubles to 30%. Researchers are studying why lesbian couples are statistically more prone to divorce, but, the data is hard to come by. Massachusetts, the first state to legalize same-sex marriage in the United States, legalized same-sex marriage in 2003, but the Supreme Court only legalized same-sex marriage at the national level in 2015. Therefore, more time and more research are necessary before we can draw meaningful conclusions.

Are there any differences between a gay divorce and a straight divorce?

When discussing gay divorce, there comes some issues with the law. In many cases, the couple who had gotten married had been together for several years in the past but had only recently married. When divorcing, the court will look over all of the couple’s finances, assets, debts, properties, and other items. This could become a problem if the married couple had bought a home together or has joint bank accounts. Since the law only looks at the time married and not the time spent in a relationship, this could bring up issues for one of the spouses. For example, if one person was the main income earner and the other spouse kept the house in check and did their own thing, the other spouse could end up with little or nothing when divorcing. The law wouldn’t look and recognize the 15-year relationship in the past, as that isn’t legally admissible.

Gay divorces can also bring up issues if there is a child or children involved. If one spouse had done an invitro-fertilization, they could have sole custody over the child. Recently, some court cases have been passed allowing the non-biological parent of the child to have sole custody over the child in these cases. If the child was adopted, there could be a chance the child would be taken back to CPS (depending on their age and how long the child had lived in the home for.) In many cases, the adopted child would be granted custody based on the same principles and rules heterosexual couples are held under. The court would grant custody or more custody to the parent in which they believe the child would be safe, could attend school properly, and live a normal life.

When discussing gay divorce, especially when comparing it against straight divorce, many legal issues arise. In some cases, the couple who had gotten married had been together for several years in the past but had only recently married. Consider California, which first legalized same-sex marriage in 2008 and immediately saw an influx of 18,000 LGBT couples getting married. Experts suggest rush had two causes: fear of subsequent legislation ripping away same-sex marriage rights and, more pertinently, pent-up demand. LGBT couples in long-established relationships could finally get married, and so they did.

The Division of Assets

In a divorce, the court will review all of the couple’s finances, assets, debts, properties, and other items, and it will try to divide them equitably. The problem, however, is that, when dividing assets in the context of divorce, the court will only consider items from during the marriage, because anything prior to the marriage is considered “separate property.” This could become a problem if the married couple bought a home together or has joint bank accounts. Since the law only looks at the time married and not the time spent in a relationship, this could bring up issues for one of the spouses and result in an inequitable division of assets. For example, if one person were the main income earner while the other spouse stayed at home (whether to maintain the home, care for children, etc.), the other spouse could end up with little or nothing in the event of divorce. Even if they had a 15-year long relationship prior to their marriage, nothing from that time would be legally admissible.

Moreover, same-sex divorce can become even more complicated when it involves children. If one spouse underwent invitro-fertilization, they could have sole custody over the child. On the flip side, some cases have allowed the non-biological parent of the child to have partial or even sole custody over the child if the court determines they are a “presumed parent.” The court makes this decision based on a number of possible factors, such as whether the individual acted like the child was their own and raised them as a parent would.

What about an adopted child? In many cases, custody of the adopted child is determined based on the same principles and rules applied to heterosexual couples: the court would grant full custody or more custody to the parent with whom it determined the child (1) would be safer, (2) could attend school properly, and (3) could live a normal life. What is more troubling, however, is that, if the child were adopted, there is a chance that CPS will take the child back (depending on their age and for how long the child had lived in the home).

What’s important to know in the context of same-sex divorce is that these couples have the same rights as straight couples. The California Family Code affords the same protections and promises the same processes to same-sex couples as it does straight couples. However, that doesn’t guarantee that an individual judge won’t discriminate, and so it’s critical to seek proper legal assistance and ensure that your rights are protected.

If you or a loved one has been thinking about getting a divorce, we invite you to contact us at Pride Legal for legal counseling or any further questions. To protect your rights, hire someone who understands them.