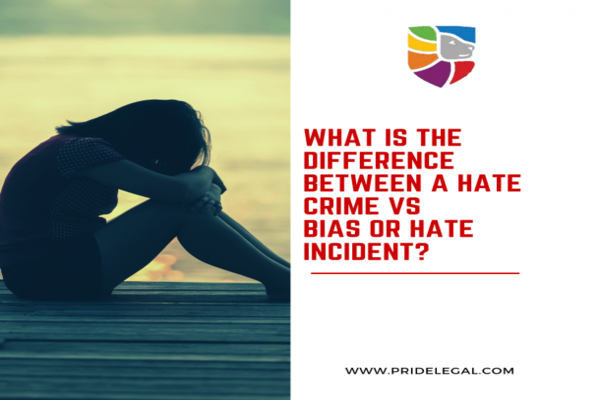 What is the Difference Between a Hate Crime vs. Bias Incident?

What You Need to Know About a Bias Incident vs. a Hate Crime

It can be difficult to distinguish between a hate crime and a bias incident. They are both examples of racism, intolerance, and disdain for the civil rights of others. Furthermore, depending on intent and the actions taken, they each may be criminal offenses.

What is a Hate Crime?

A hate crime is an offense based on the victim’s color, race, national origin, gender, sexual orientation, religion, age, ancestry, or disability. A hate crime is any crime committed because of these factors, or a victim selected because of these factors. Examples include physical assault, stalking, criminal threatening, vandalism, verbal abuse, and reckless conduct.

Have you been involved in a hate crime or bias incident? Contact a Pride Legal Attorney today!

What is a Bias Incident?

Bias incidents are statements that are offensive or racist but are not illegal. These incidents are types of prejudice that are not criminal offenses because legislators have decided not to criminalize them, or because they are protected under the First Amendment. Examples include hate speech, religious slurs, sexist jokes, offensive graffiti, or remarks on social media.

Have you been involved in a hate crime or bias incident? Contact a Pride Legal Attorney today!

How to Distinguish the Two

No matter how you classify these two concepts, the fact is that they are both morally and ethically wrong. No one should feel intimidated, threatened, or discriminated against.

If you or a loved one have been involved in a hate crime, we invite you to contact us at Pride Legal for legal counseling or any further questions. To protect your rights, hire someone who understands them.