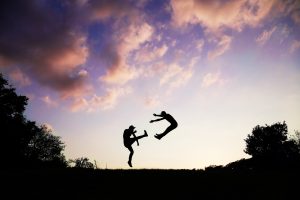 Assault is willfully acting in a manner that will result in the exertion of force upon another individual. In criminal law, assault is interpreted as an endeavor to cause physical injury. While assault does not require any physical contact with another individual, battery does. Assault can be categorized as a misdemeanor or felony while battery can solely be categorized as a misdemeanor. Assault & Battery cases are often difficult cases because a majority of the case can be based on “he said she said” evidence. However, Pride Legal’s assault & battery defense lawyers have extensive experience with such cases and will proudly defend any case.

There are 2 types of assault: simple assault and aggravated assault.

Simple assault is usually charged as a misdemeanor when the person is not substantially injured and no weapons were involved. On the other hand, an aggravated assault occurs when any type of deadly exertion was used such as a gun, knife, fist, or feet with the intention of harming another individual. Typically, an aggravated assault charge is considered a felony.

Elements of Assault & Battery in California

The 3 elements that must be proven in a Battery case:

Thomas walks into a bar and sees his girlfriend dancing with another man. Thomas approaches the man, and begins aggressively pushing him, throwing him onto the pool table and grabbing him by the shirt. Security soon separates the two men and police arrive. Because the victim only suffered a few bruises and Thomas did not use a deadly weapon, Thomas is arrested on a simple assault charge. Thomas has committed a misdemeanor.

Randy walks into a bar and sees his girlfriend dancing with another man. Randy approaches the man, grabs him by the shirt, and begins to repeatedly punch him in the face, ultimately breaking his nose. Security soon separates the two men and police arrive. Because the victim suffered from a broken nose and Randy used his fists, which are considered a deadly weapon, Randy is arrested on a aggravated assault charge. Randy has committed a felony.

A conviction will not take place if the prosecutor cannot prove each of these 3 elements. However, if all 3 elements are proven, some penalties include:

Know Your Rights About Assault & Battery

There are many different techniques attorneys at Pride Legal will utilize to prove that you are not guilty of Assault and/or battery. Some of these strategies include self-defense, proving that the physical contact was an accident, and that you had consent to act the way you did. At Pride Legal, your freedom is the most important factor to us. If you or a loved one has been involved in either an assault or battery case, contact Pride Legal immediately so that our assault & battery defense lawyers in Los Angeles can not only help you put this issue in the past but also provide you with the rights you deserve.

If you are facing charges for assault and battery and need representation, contact a California Gay and Lesbian Assault and Battery Defense Attorney today.